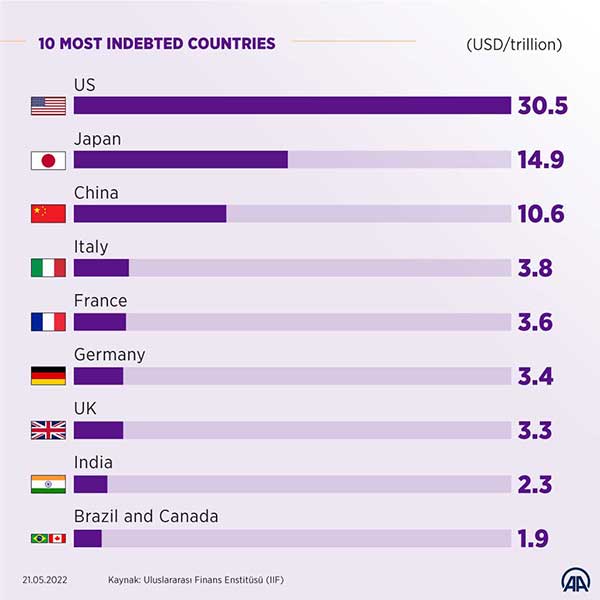 ISTANBUL – Global debts exceeded the USD300 trillion threshold as of the end of the first quarter of this year with loosening monetary policies to support the economies, while the dollar index increased by 8 percent.

The record level incentives provided by governments to households and fragile sectors to revive the declining consumption related to the pandemic in the global economy brought along a significant rise in public debt.

With the deepening of supply chain problems since the start of the Russia-Ukraine war on Feb. 24, the global trade, already weak due to the pandemic, was further disrupted.

During this process, investors’ tendency to turn into safe havens in an environment of rising inflation and interest rates strengthened the dollar.

With the support of factors such as the aggressive interest rate hike expectations from the Fed, the better recovery of the US economy compared to other countries, and the preservation of its attractiveness in terms of capital flows, the dollar index increased by 8 percent to the level of 103 since the beginning of the year.

In this process, where the index tested the highest levels in 20 years with 105, the pressure on the currencies of developing countries also increased.

When the strengthening of the dollar was added to the public debts, which already rose to record levels, the financial burdens began to be alarming in many countries, especially in developed countries.

US, the most indebted country

The rise in the dollar helps the US reduce its import costs, while the competitive advantage of other countries in exports supports the process of reducing inflationary pressures.

It is noteworthy that the political reactions against the rise in the dollar and the tension of the “trade wars” have not yet occurred.

Meanwhile, given the weak course of the global economy, the strengthening of the dollar’s dominance against other currencies poses a risk to the welfare level of other countries and to the currently unstable financial markets.

The figures released by the Institute of International Finance indicate that the global debt amounted to USD305.3 trillion in the first quarter, with an increase of UST3.3 trillion compared to the end of last year.

The data compiled by the US Debt Clock also showed that the US is the most indebted country in the world with UST30.5 trillion. Japan ranked second with USD14.9 trillion, while China third with USD10.6 trillion.

Other countries in debt are Italy with USD3.8 trillion, France with USD3.6 trillion, Germany USD3.4 trillion, the UK UST3.3 trillion, India with UST2.3 trillion, Brazil and Canada each with UST1.9 trillion.

While the total debt of these 10 countries exceeded UST76 trillion, this figure indicated that one-fourth of the global debts belong to these countries.

According to the World Economic Outlook Report published by the IMF in April, among the developed countries with the highest public debt ratio to the national income by the end of this year, Japan is expected to rank first with 263 percent.

The economic growth, which is expected to slow down significantly this year, will increase the negative effects on the debt dynamics of especially developing and low-income countries.

Considering the increase in food and energy costs, the ongoing rise in the dollar for low-income countries may result in social problems such as default and famine.

Looking at the data, the ratio of public debt to national income is expected to reach 284 percent in Sudan by the end of this year, where the rate increased rapidly from 184 percent at the end of 2021 due to the political crisis in the country.

So, Sudan has surpassed Japan, which has been globally in the first place in terms of indebtedness ratio to the national income for years.

Cabo Verde is in second place after Sudan with 159 percent, Eritrea in third place with 152 percent, and Bhutan is fourth with 134 percent.