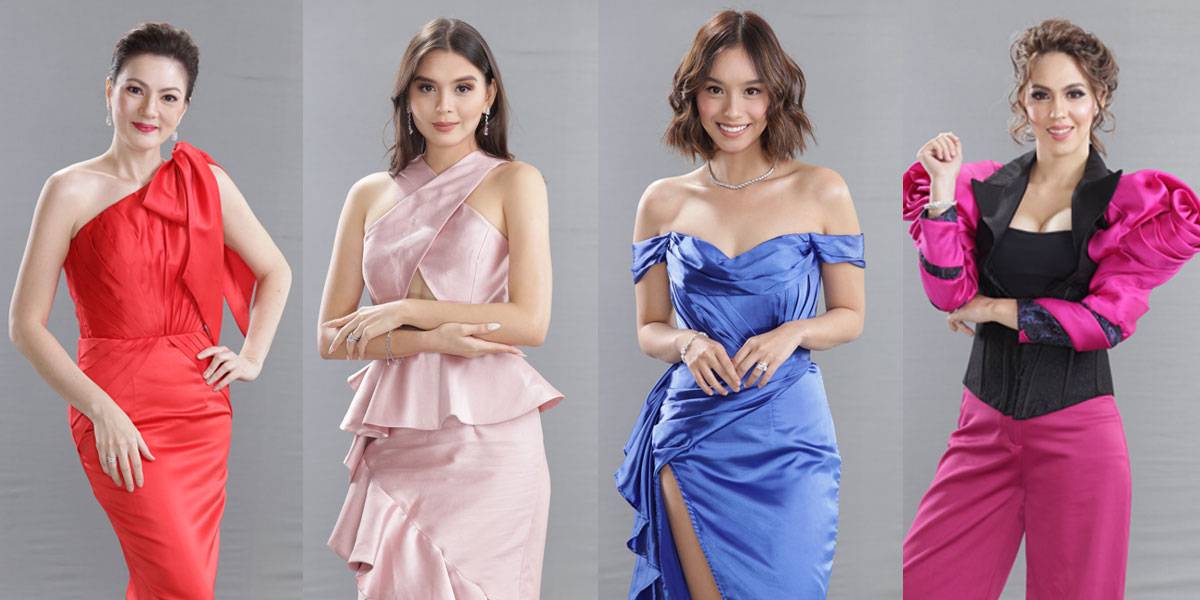 Four women caught up in a twisted murder case that will entangle them in a web of secrets, mysteries, and lies.

Beginning February 28, GMA Network brings forth a compelling and gripping family drama that will keep every Kapuso viewer at the edge of their seats via the first suspenserye ‘Widows’ Web.’

“How can I say no to this project? Ito ang unang suspenserye ng GMA. When this was offered to me, wala pa akong alam kung sino ‘yung ibang cast, pinabasa lang sa akin ‘yung synopsis and I said yes to do it right away without knowing lahat,” shares Carmina who did not think twice about accepting this project. “The story itself captured my attention kasi gusto ko ‘yung ganon, every time I do something new, gusto ko yung ma-eexcite ako.”

Ashley, in turn, shares her gratitude for landing the role of Jackie and how she works her way into channeling her, “I’m very grateful na nabigyan ako ng chance to star in this very beautiful project and na-pressure din ako at the same time kasi siyempre, bigatin ang mga kasama ko sa series. Si Direk Jerry (Sineneng), the other cast, karamihan ay first time ko makatrabaho. My character here is very different from my past character in Legal Wives so talagang I have to put effort in it.”

Joining them is a powerhouse cast composed of: Adrian Alandy as Vladimir Mabantog, Elaine’s mysterious friend; Edgar Allan Guzman as Frank Querubin, loving boyfriend of Elaine who will be the prime suspect in Xander’s death; Christian Vasquez as Boris Tayuman, the family lawyer of the Sagrado’s; Arthur Solinap as Emil Banez as the lead police investigator who will handle the case of the Sagrado’s; Bernard Palanca as William Suarez, Xander’s bestfriend and the caring husband of Hillary; Allan Paule as Ramon Innocencio, Elaine’s father and a former policeman; Tanya Gomez as Gloria Querubin, Frank’s doting mother; Mosang as Delia Mendoza, the strict headservant of the Sagrado’s; Dave Bornea as Dwight De Guzman, William’s physical therapist; Neil Coleta as Julius Collado, Elaine’s smart cousin who is also a lawyer; Mike Agassi as George Aguirre, an athletic and arrogant man who wants to be close to the Sagrado’s; Karenina Haniel as Rose Punzalan, the new househelp of the Sagrado’s.

The series also features the special participation of Ryan Eigenmann as Alexander Sagrado III aka AS3 or Xander, the murder victim who is the patriarch of the Sagrado family.

Elaine (Pauline), a hardworking hotel staff, tries her best to spare the life of her fiancé Frank (Edgar Allan) from the murder of his boss Alexander Sagrado III (Ryan), a family patriarch whose widow Jackie (Ashley), sister Barbara (Carmina), family friend Hillary (Vaness) and close associates are all implicated in the case.

Who killed Alexander Sagrado III? Will the murderer get away with it? How will the lives of Barbara, Hillary, Jackie and Elaine intertwine in a web of love, hatred, and revenge?

Direk Jerry is very proud of his first project as a Kapuso and expresses his gratitude to GMA for entrusting him this series, “This is one of the best scripts I have ever directed. Gustong-gusto ko talaga itong materyal na ‘to. This is really one of the best written shows I have ever directed and I am so happy and proud talaga. Lahat sila sa cast, mahuhusay. I’d like to thank GMA for giving me this cast kasi sobrang sarap katrabaho, sobrang gaan at sobrang gagaling. Makikita niyo naman po pag napanuod niyo na yung mga shows, ang galing galing nila.”

Watch how the story and the chaos unfold in this perfect crime and suspense drama via ‘Widows’ Web’ beginning February 28, weeknights, right after First Lady, on GMA Telebabad.

Viewers abroad can also catch the program via GMA Pinoy TV. For more stories about the Kapuso Network, visit www.GMANetwork.com.