The latest figure is based on the Consumer Price Index (CPI) data generated from the Retail Price Survey (RPS) of Commodities conducted by the Philippine Statistics Authority (PSA).

“Data showed that the average inflation for the first semester of the current year stood at 5.6 percent,” Provincial Statistics Officer Nelida B. Losare said.

The uptrend in the Guimaras’ June 2022 inflation was mainly due to the higher annual increment in the indices of the heavily-weighted food and non-food commodities: Food and Non-Alcoholic Beverages, 9.5 percent; Transport, 13.9 percent, and Restaurant and Accommodation Services, 3.0 percent. 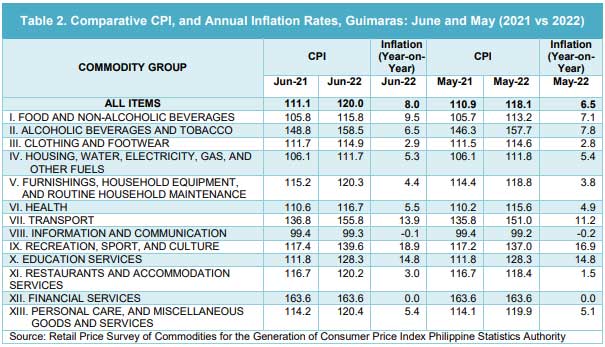 “The 9.5 percent inflation in the Food and Non-Alcoholic Beverages, was mainly propelled by the annual price increment in the indices of Food (9.4%) and the non-alcoholic beverages (10.4%),” Losare said. 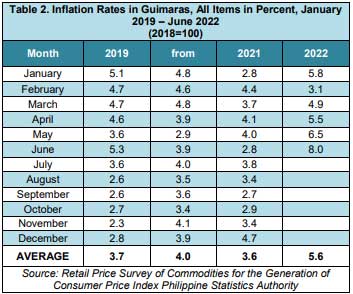 Losare said the 51.6 percent price hike in Gasoline and the 12.6 percent increment in other passenger transport by road pushed the 13.9 percent inflation rate in the Transport Commodity group in June 2022.

“The 3.0 percent inflation on Restaurant and Accommodation Services was due to the price increments of Restaurants, café, and the like-full services at 3.0 percent, while the hotels, motels, inns, and similar accommodation services remained steady,” Losare said.

Losare also emphasized that other contributory factors to the mark up in the overall June inflation were the higher annual increment in the indices of Furnishing, Household Equipment and Routine Household Maintenance (4.4%); Health (5.5%); Personal Care, And Miscellaneous Goods and Services (5.4%); Recreation, Sport, and Culture (18.9%); Clothing and footwear (2.9%); and Information and Communication (-0.1%).

“Two commodity items, however, managed to slow down their inflation rates in June 2022: Alcoholic Beverages and Tobacco at 6.5 percent from 7.8 percent a month ago; Housing, Water, Electricity, Gas and other Fuels at 5.3 percent from 5.4 percent in May 2022”, Losare expressed.

She further explained that only the commodity groups of Education Services; and Financial Services retained their previous month’s inflation rates at 14.8%, and 0.0%, respectively. 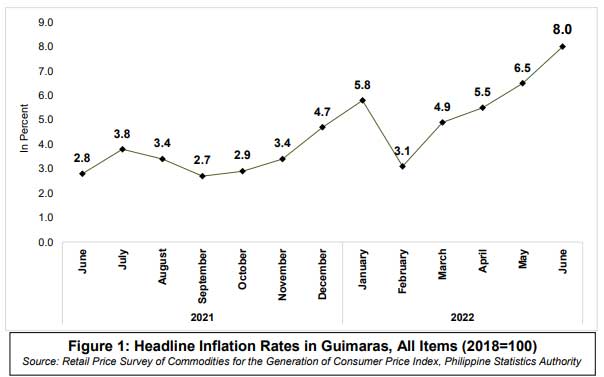 The 8.0 percent inflation in June is the fastest year-on-year rate recorded since 2019. (See table 2)

Meanwhile Losare cited that the average Purchasing Power of the Peso (PPP) in June 2022 is at 0.83 which is lower compared to the previous year’s 0.90. This means that the purchasing power of the peso depreciated, thereby interpreting that the one peso in 2018 is now valued at 0.83 centavos.