Twitter has been a platform of choice for many online campaigns, whether it be for brands or social movements. In the 2022 Philippine National and Local Elections, Twitter and Facebook are two of the digital platforms where candidates try to interact, convince, and rally with an electorate that is becoming hyper-engaged in online communities.

Tweets during the campaign period

Quote retweets (QRTs) and replies were included. Because historical tweets were collected and not those posted in real-time, the dataset does not include all tweets posted during that period. There might have been viral tweets not included in the dataset because they were either deleted by the user or by Twitter, or the account that posted was either private or suspended.

Focusing on the most engaged camps on Twitter, the Leni-Kiko and BBM-Sara camps used Twitter hashtags to mobilize and energize supporters to trend sorties, volunteer events, information drive, and election campaigns. This analysis focuses on the competing or countering hashtags that emerged during the campaign period such as

We also collected historical tweets for other prominent hashtags used consistently by both camps. The disparity in the number of hashtags (14 vs 9) is reflective of the level of activity shown by supporters on the platform, which is largely dominated by the Leni-Kiko camp.

From October 1, 2021 to April 27, 2022 (5PM), there were 1,203,204 tweets, QRTs, and replies posted on Twitter that use at least one of the hashtags listed above. And from those posts, there were a total of 72,202 valid unique hashtags used in different combinations. To visualize, a hashtag network was created to show the co-occurrence or the number of times two hashtags appear together in a Twitter post, generating 568,015 unique hashtag pairings. 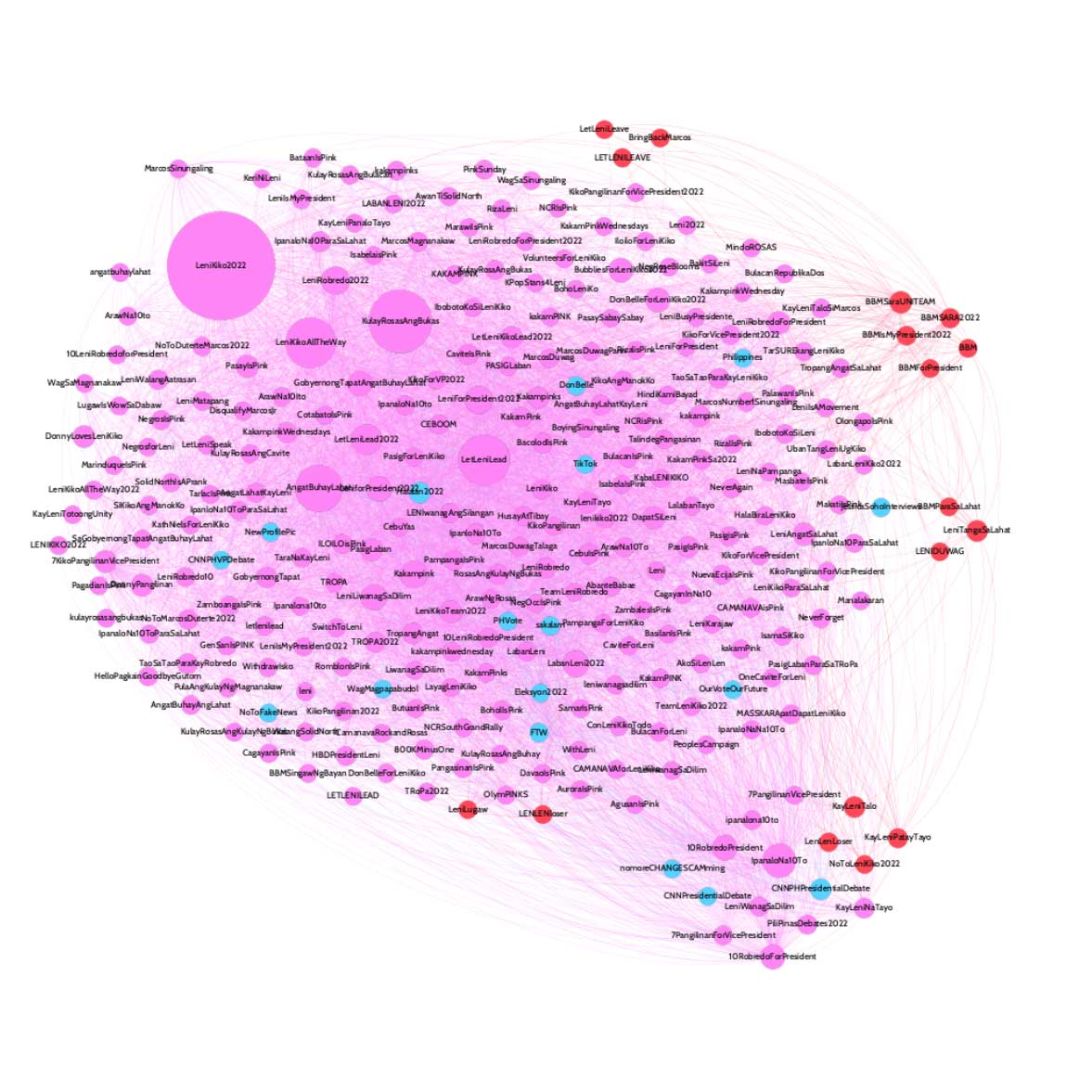 Zooming in on the 276 hashtags that appeared on at least 1,000 posts, it can be seen that Leni-Kiko-related hashtags dominated with 87.68% of the most used hashtags. The most popular hashtag is #LeniKiko2022 used in 40.28% of tweets in the study. The rest of the top 5 hashtags used during the campaign period were also from Leni-Kiko related: #KulayRosasAngBukas (20%), #LeniKikoAllTheWay (14.59%), #LetLeniLead (14.58%), and #AngatBuhayLahat (12.94%). However, please note that these numbers do not aggregate counts from different variations of a hashtag (e.g. #LeniKiko2022 and #lenikiko2022).

Looking at the content of posts, the Leni-Kiko hashtags were mostly used [1] to highlight the candidate’s platforms, [2] to consolidate personal accounts from beneficiaries, stories from people who shifted support and those who convinced other people, and [3] to share and consolidate volunteer initiatives like collaterals and house-to-house campaign strategies.

For example, the #KakampinkWednesdays hashtag was used to consistently engage the supporters and show their growing number. Of course, they also show strong opposition to other candidates using hashtags such as #MarcosDuwag and #NoToMarcosDuterte2022.

However, they only comprise around 4% of the Leni-Kiko-related hashtags. Event-specific hashtags like #CaviteIsPink and #PasigLaban were first used by Leni-Kiko supporters to hype interest and encourage more supporters to attend. Their use starts a few days before the actual event date, peaks a day before and on the actual event date, and is sustained for the next two days. For bigger events like the #NCRSouthGrandRally, event-specific hashtags were also used by volunteers to call for immediate support like additional manpower and supplies. 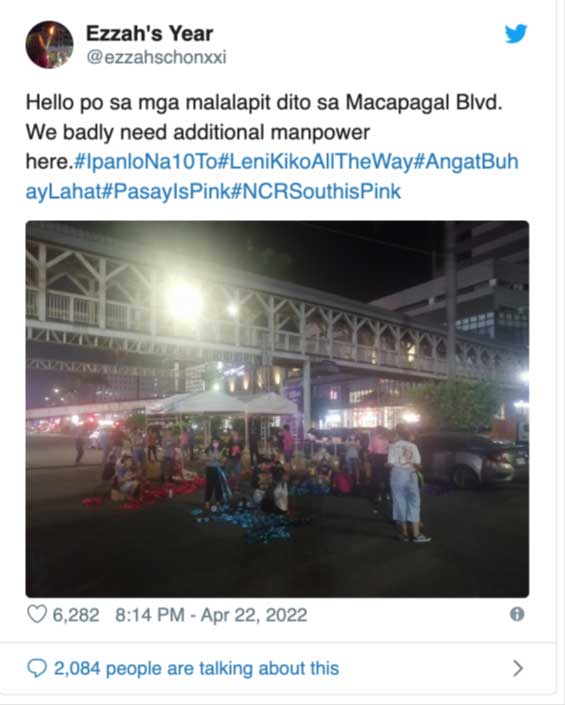 The level of coordination and regularity of supporters in their use of Leni-Kiko-related hashtags is very similar to how pop group fandoms rally for their idols on online charts, and to how we respond real-time to disasters on Twitter.

In total, there were only 17 or 6.16% of hashtags related to the BBM-Sara campaign and used by their supporters.

BBM-Sara-related hashtags are mostly used by supporters to highlight why they are voting for the tandem. In particular, the #BBMSaraUNITEAM is consistently used for most posts related to their campaign. This is also what the Leni-Kiko supporters use to break through their echo chamber. Interestingly, more than half of their most-used hashtags (10 out of 17) are aimed to show strong opposition towards the other candidate like #LeniTangaSaLahat and #LenLenLoser. Other top hashtags include #BBMSARA2022, #KayLeniPatayTayo, #BBMIsMyPresident2022, #LETLENILEAVE, #NoToLeniKiko2022, #BBMParaSaLahat, #LENIDUWAG, #LENLENloser, and #LeniLugaw.

Similar to the other camp, BBM-Sara supporters also use event-specific hashtags to promote and trend their campaign sorties such as #PulaAngCebu and #PulaAngTaguig. Aside from this, they also seem to borrow a particular strategy from fandoms — Twitter parties, in which a single hashtag and a tagline are created and used by supporters starting from a specified time. In their case, a central account coordinates and prepares the publicity materials, which is shared by everyone for proper coordination. While it has been an effective strategy for fandoms on Twitter, it does not seem to be case for the BBM-Sara campaign as none of their Twitter party hashtags were used in at least 1,000 posts. However, it is still possible that their hashtags trended on the day of the event but many of those posts became deleted or withheld. 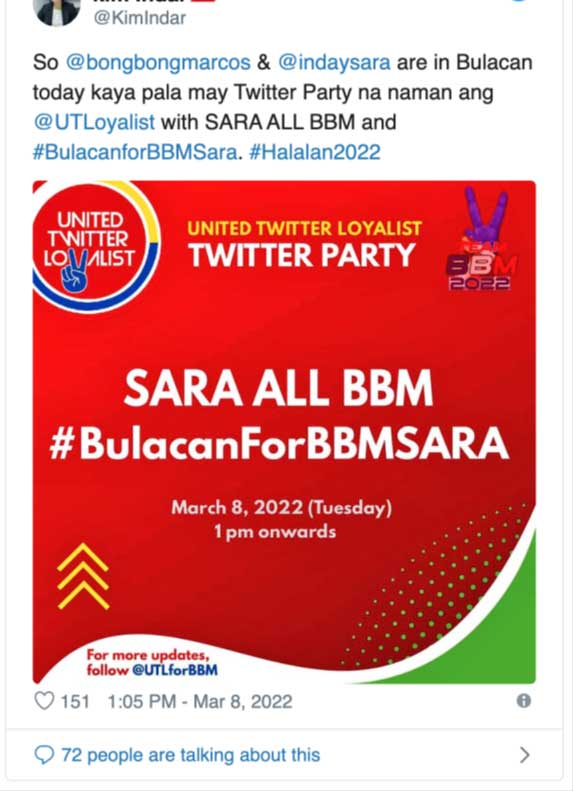 The #KayLeniTayo hashtag was used since the start of the campaign partly because of the song written by volunteers and performed in many Leni-Kiko campaign sorties. Posts using this often express their affirmation of support to the Leni-Kiko tandem.

Meanwhile, the #KayLeniTalo hashtag was created to counter this trend in which BBM-Sara supporters express reasons why the Vice President and her ticket would lose the elections. At the same time, the #KayLeniPatayTayo hashtag is being used on posts that speculate the infiltration of the CPP-NPA in Leni-Kiko people’s rallies. However, this assertion has already been denied by the Vice President and independently fact-checked.

The #KayLeniTayo hashtag and its variation #KayLeniNaTayo (2.23%), are widely used among Leni-Kiko supporters, as evidenced by its heavy mixing with other popular hashtags. On the other hand, the #KayLeniTalo (1.36%) and #KayLeniPatayTayo (0.7%) have very few mixing with Leni-Kiko-related hashtags which could mean a weak intent to spread their speculations within the Leni-Kiko camp. 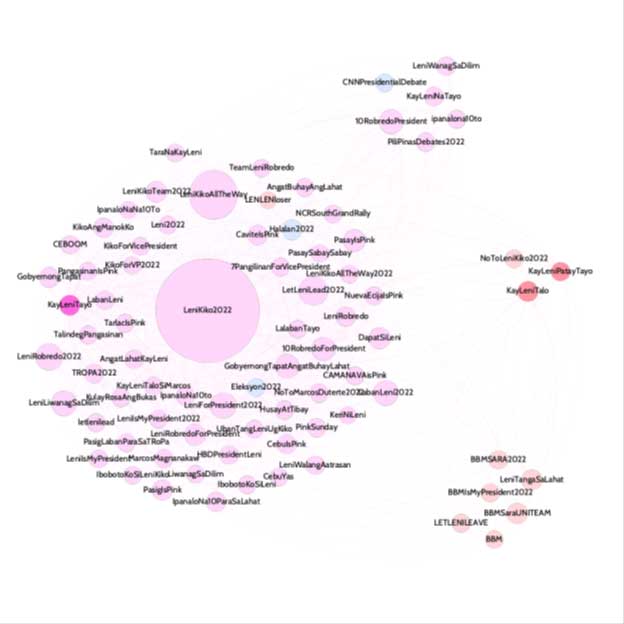 At the beginning, Leni-Kiko supporters were hijacking the #KayLeniTalo hashtag with counter-arguments while still boosting it in the trend list. This is similar to how KPOP fandoms in the US hijacked the #ImpeachBidenNow and #WhiteLivesMatter hashtags. As a change of tactic, the #KayLeniTaloSiMarcos hashtag was used to stop boosting the opposing hashtag and bring back the focus to the shortcomings of the BBM-Sara tandem. It was also used in posts highlighting VP Leni Robredo’s winning record against Bongbong Marcos in the previous election, which fuels hope for another positive election outcome. 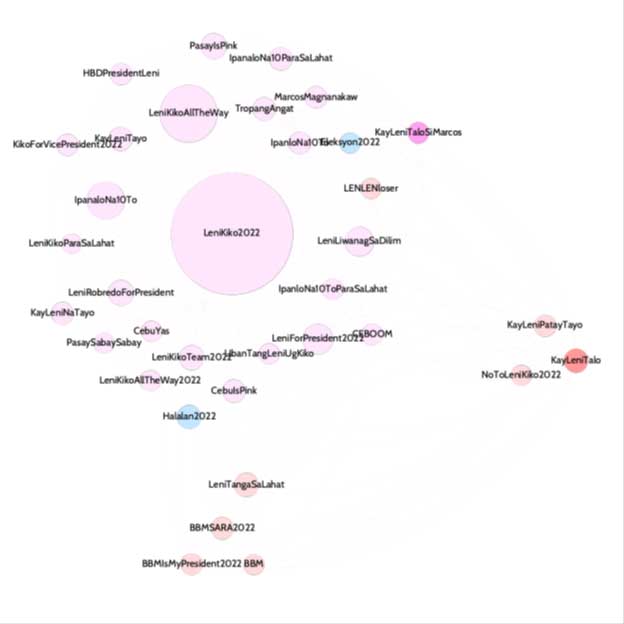 The #LetLeniLead has been one of the most used hashtags among Leni-Kiko supporters ever since VP Leni Robredo filed her candidacy. So it comes to no surprise that it is still being used in many posts today, mixed with other Leni-Kiko-related hashtags. The BBM-Sara supporters try to counter this with the #LetLeniLeave hashtag used in posts about the shortcomings of VP Leni Robredo. However, this seems to be confined within their circle as there are no posts that mix with Leni-Kiko-related hashtags. The #LetLeniLeave and its variant #LETLENILEAVE were used in only 0.5% of tweets in the study, which pales in comparison to the #LetLeniLead hashtag which comprises 14.58% of tweets. 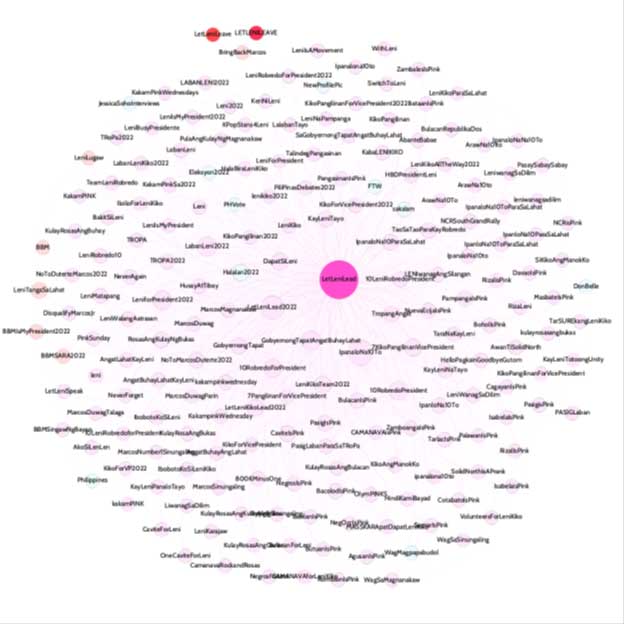 Twitter has been a popular platform for online communities and movements, so it is no surprise that the two largest camps are trying to outdo each other to dominate online engagements and conversations. For a hyper-engaged supporter base, it is easy to gain momentum with their familiar, casual, and strategic use of hashtags on the platform. But countering ongoing campaigns and trends is not as easy as we think. The BBM-Sara supporters were able to trend popular countering hashtags like #KeyLeniTalo and #LetLeniLeave, and they were successful in distracting the supporters of the opposing camp in dominating online conversations. But this was short-lived because their supporter base are not as active, and the Leni-Kiko supporters have become used to hijacking opposing hashtags to change the overall narrative. While this may sound like a win for the dominant “Kakampinks,” let us remember that elections are not only won online. We have yet to see if this dominance and momentum will translate to bigger and better outcomes for supporters.

Daily Guardian is part of #FactsFirstPH, which brings together various sectors that are committed to promoting truth in the public space, and exacting accountability on those who harm it with lies. For those interested to join the initiative, email [email protected] and [email protected], or send a message to facebook.com/DailyGuardianPH.