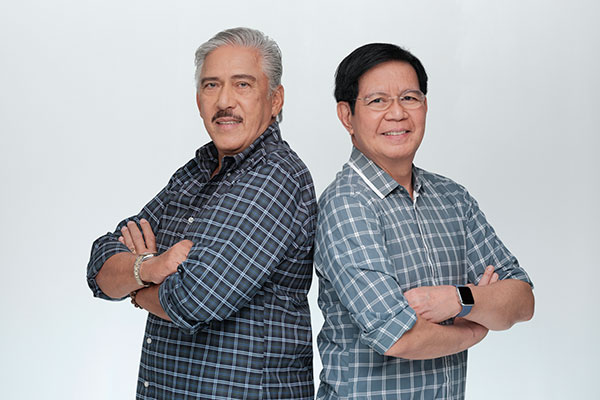 Partido Reporma chairman and standard-bearer Panfilo ‘Ping’ Lacson and his running mate Senate President Vicente ‘Tito’ Sotto III pushed back against criticisms made by their political rivals that they were wanting in terms of tangible achievements despite their long years in public service.

Insofar as both veteran lawmakers are concerned, such brickbats could not be further from the truth as they had been largely successful in authoring and sponsoring legislations aimed at promoting transparency, good governance and public accountability, among their many advocacies.

Speaking to DZMM radio in a recent “On the Spot Vice Presidential Interview,” Sotto enumerated some of the laws he and his partner enacted as well as the investigations they led while in office, which resulted in actions taken by government agencies in charge to rectify the problems.

These include the mismanagement of the PhilHealth funds, agricultural smuggling, implementation of the Good Conduct Time Allowance of the Bureau of Corrections, allegations of electoral fraud, and the many corruption exposés involving public officials, to name a few.

“Makikita niyo naman siguro ang independence namin e (I think you can tell that we have always maintained our independence),” said Sotto, who was the principal author of the Dangerous Drugs Act of 2002 that led to the creation of the Philippine Drug Enforcement Agency.

Sotto also reminded their opponents, critics and the voting public alike to get their facts straight and learn how to distinguish the differences of the mandates between public officials in the executive and legislative branches of government before accusing him or Lacson of lacking in action.

“Madaling gumawa ng batas pero ang problema pagka sa execution doon nagkakaloko-loko e (It is easy to make laws, but the problem lies in the execution. This is where the trouble starts),” said Lacson, who earned the reputation as chief custodian of the national budget in the Senate, in a separate interview.

After announcing their respective candidacies for the 2022 general elections, Lacson and Sotto established a strict ‘no mudslinging’ policy among themselves and their supporters with the intention of elevating the level of political discourse in the country.

Lacson has repeatedly stated that he and Sotto do not look at their opponents as enemies, but the most pressing problems facing the nation today like the lingering COVID-19 pandemic, poverty, joblessness, crime, corruption and the like, which they vowed to solve once they both get elected.

The longtime public servants are banking on their combined 83 years of track record, 42 of which were spent in the Senate, and the rest on various roles under the executive branch. They have agreed to campaign based on their own merits and not on the deficiencies of their rivals.

“I’m always proud of my track record, my integrity, and my competence. I don’t mean to brag but I know myself; I know my limits and I know what I can (still do for our country),” Lacson said in a mix of English and Tagalog in a recent interview over the ABS-CBN News Channel.

Lacson was credited by many as the most trusted and popular chief of the Philippine National Police, which paved the way for him in the national political arena. Throughout his 18-year stint in the Senate, he maintained a tough, no-nonsense reputation as senator, especially when he refused to buy into the ‘pork barrel’ culture.

Among the key legislations he authored were the Revised AFP Modernization Act, the Anti-Red Tape Act, Anti-Hazing Law, to name a few. He is also pushing for his flagship Budget Reform Advocacy for Village Empowerment and the Science for Change programs.

The principle of ‘leadership by example’ has become a rallying cry for the Lacson-Sotto tandem and members of their campaign teams on top of adopting the tagline ‘Aayusin ang Gobyerno, Uubusin ang Magnanakaw’ (Fix the Government, Get Rid of the Thieves).