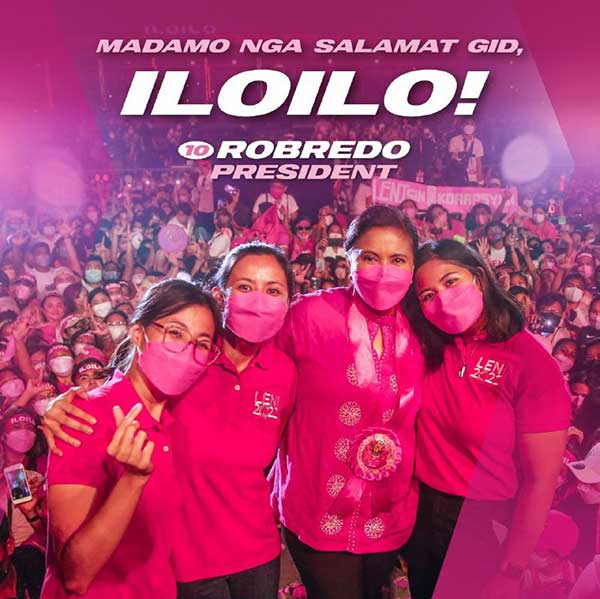 The estimated 40,000 people who joined the campaign rally of presidential bet and Vice Pres. Leni Robredo last Feb 25, 2022 was a showcase of volunteerism.

This was the common statement of Iloilo City Mayor Jerry Treñas and Iloilo Gov. Arthur Defensor Jr., who both endorsed Robredo’s candidacy in the May 2022 elections.

The rally coincided with the commemoration of the EDSA People Power Revolution which also saw the collective and voluntary uprising of Filipinos against the late dictator Ferdinand Marcos Sr., father of presidential bet Ferdinand Marcos Jr.

Treñas said no one was paid or forced to attend the rally.

“I would like to thank all the Ilonggos who joined us last Friday during the People’s Rally. The resounding success of the event has gathered many skeptical remarks and allegations coming from all parts of the country, but we remain steadfast as a people. Nobody out of the 40,000 who attended was forced, required, or paid. People are from different sectors who crave good governance that’s why it felt like a movement rather than just a campaign,” the mayor said.

Treñas added that Ilonggos do not resort to manipulation or disinformation to express their sentiments.

“We rallied to show support to the next President of the Philippines and her whole slate. We also did not feel the need to edit drone shots, because in the first place, that is not how Ilonggos do it. We are sincere with our support, and I am proud to say that during the people’s rally, we were 40K strong!”

Defensor Jr. also issued a statement expressing his gratitude to the Ilonggos who showed their support during Robredo’s rally.

“I would like to express my deep appreciation to my fellow Ilonggos who helped show our collective strength in organizing the biggest political rally that this country has seen so far.”

Defensor said the event at the Iloilo Sports Complex in Iloilo City gathered people from all walks of life in the spirit of volunteerism.

“It was, by far, the greatest manifestation of volunteerism and I am extremely proud of you all. It really was heartwarming to see people from all walks of life being united by a common vision of electing a President that we all truly deserve.”

He added that the event was indeed a People’s Rally as “not one of you was forced or paid to be there.”

For by being there, we have shown to the rest of the Filipino people the resolve of the Ilonggos. We hope other provinces and cities who are supporting Vice President Leni Robredo can break the 40,000-record of the Ilonggos. We are happy to be beaten, but while the trophy is still in Iloilo, we will raise it with honor and pride.”

On the sideline of the presidential debate hosted by CNN Philippines on Feb 27, Robredo said she was still on a high with the overwhelming support.