The preliminary results of the nationwide 2021 Updating of the List of Establishments (ULE) showed that more than 1.08 million establishments were in operation and generated 8.57 million total employment during the reference year.

Compared to the results of the 2018 ULE, the number of establishments increased by 7.7 percent while total employment declined by -5.2 percent.

The 2021 ULE was conducted generally to update the status and characteristics of establishments in the Philippine Statistics Authority’s (PSA) List of Establishments (LE) and to provide information on the distribution of establishments and employment across areas and industries. The LE serves as the source of sampling frame for all establishment-based surveys and censuses conducted by the PSA.

Figure 1. Total Number of Establishments In Operation by Region: 2021(p)
(In Thousand) 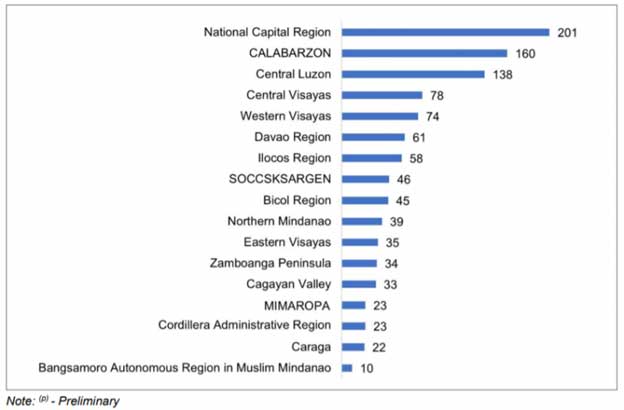 Almost half (49.9%) of the total number of establishments in operation are engaged in Wholesale and Retail Trade; Repair of Motor Vehicles and Motorcycles (Industry Section G) with more than 539,741 establishments which also generated the highest employment of 2.4 million in 2021.

On the other hand, there were 56,971 establishments captured with temporarily stopped operation status. The combined total employment displaced due to permanent closure and temporary stoppage of operation was 1.47 million.