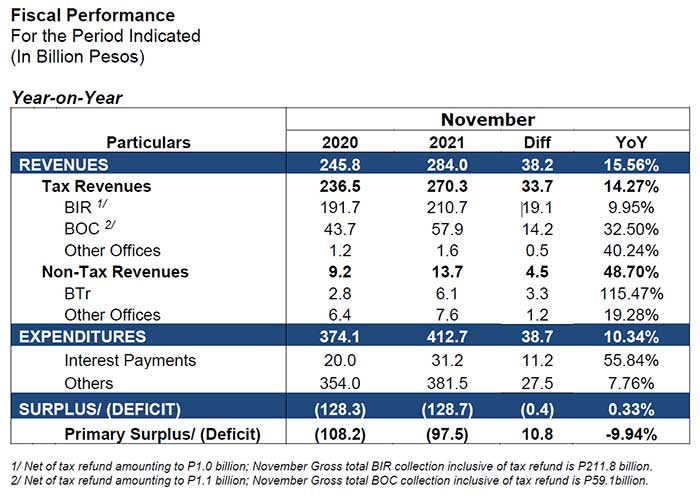 The National Government’s (NG) budget deficit for November was recorded at P128.7 billion, barely higher than last year’s shortfall by 0.33% as both government revenue and expenditure grew by 15.56% and 10.34%, respectively.

The year-to-date deficit (YTD) rose to P1.3 trillion, surpassing the budget gap registered in the same period last year by 24.63% or P263.2 billion although accounting for just 72% of the P1.9 trillion 2021 revised program[i]. 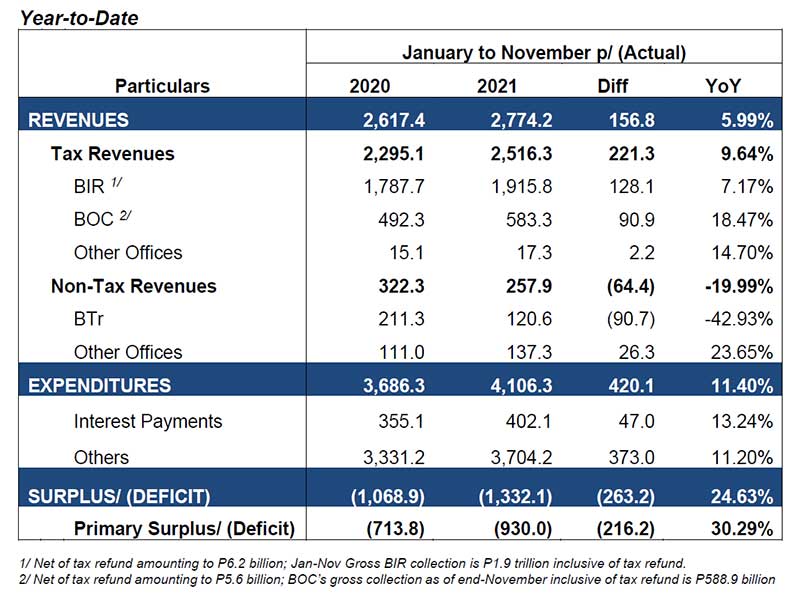 Revenue for November jumped by 15.56% or P38.2 billion year-on-year (YoY) to P284.0 billion resulting from the gradual resumption of economic activities compared to last year.

Tax revenue grew 14.27% YoY and contributed P270.3 billion or 95% to the total while the remaining P13.7 billion was raised through non-tax collections which also registered a 48.70% increase over last year.

The P2.8-trillion cumulative revenues from January to November 2021, equivalent to ninety-six (96%) of the P2.9 trillion revised full-year program, similarly improved by 5.99% or P156.8 billion over similar collections achieved in the 11-month period last year.

BIR’s total collection as of end-November amounted to P1.9 trillion was 7.17% faster than the P1.8 trillion raised in the same period a year ago and comprised 92% of the revised full-year target of P2.1 trillion.

BOC’s cumulative revenue for the 11-month period of P583.3 billion likewise grew by 18.47% over last year’s comparable outturn and is 95% of the P616.7 billion adjusted program for the year.

The total Bureau of the Treasury (BTr) income for November more than doubled to P6.1 billion from last year mainly driven by the increase in dividend remittances and NG share from PAGCOR income.

On the other hand, YTD income of P120.6 is lower by 42.93% or P90.7 billion over the same period last year, but already exceeded the original full-year program of P74.7 billion by 61.5% or P45.9 billion buoyed by higher dividend remittances, earnings from BSF/SSF holdings, income from deposits with BSP as well as interest on advances from GOCCs.

Revenues from other offices (other non-tax including privatization proceeds and fees and charges) for the month totaled P7.6 billion, 19.28% or P1.2 billion better than 2020 similar collections.

NG disbursement for the month of November amounted to P412.7 billion outperforming the previous year’s actual level of P374.1 billion by 10.34% or P38.7 billion.

This is mainly attributed to the higher spending performance by the DPWH, DND, DOH, CHED, and DSWD. As a result, cumulative expenditures as of end-November rose to P4.1 trillion, growing by 11.40% or P420.1 billion YoY, but only accounted for 87% of the P4.7 trillion revised program for the year.

November primary spending (net of interest payment) of P381.5 billion made up 92% of the total disbursements, exceeding the previous year’s outturn by 7.76% or P27.5 billion.