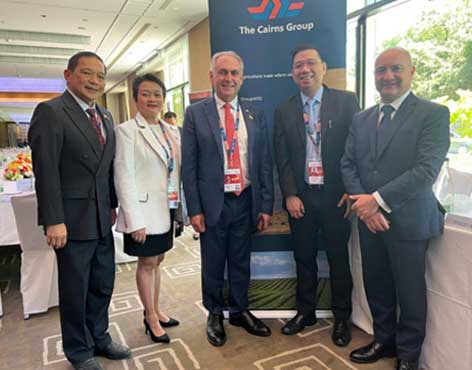 Philippine and Thai delegations to the 12th WTO Ministerial Conference (MC12) have expressed gratitude to the Australian government through Assistant Minister for Trade Don Farrell for the successful facilitation by Australian Ambassador to the WTO George Mina of the Philippine-Thai negotiations on an agreement aimed to settle cigarette trade disputes between the two ASEAN countries.

Minister Farell is in Geneva as one of the three vice-chairs of MC12, where he advocated for a WTO pandemic response, agricultural reform, an agreement to limit subsidies that undermine fish stocks, and a mandate to reform the WTO.

Prior to the opening ceremony, Minister Farrell chaired a meeting of the Cairns Group Ministers, a coalition of 19 agricultural countries committed to agricultural reform in the WTO, where he met Philippine MC12 Head of Delegation Undersecretary Rodolfo Ceferino of the Department of Trade and Industry, Philippine Ambassador to the WTO Manuel AJ Teehankee, and Thai Ambassador to the WTO Pimchanok Pitfield.

Ambassadors Teehankee and Pitfield concluded the negotiation last June 7 at the WTO in the presence of Ambassador Mina and WTO Director General Ngozi Okonjo-Iweala.