The household (HH) sector recorded the highest net financial asset position at ₱9 trillion, 21.4 percent higher than the ₱7.4 trillion in Q3 2019. The sector’s net claims were largely against the other depository corporations (ODCs) and other financial corporations (OFCs).

The claims against the ODCs and OFCs were in the form of deposits, equity and investment fund shares and insurance, pension, and standardized guarantee schemes, respectively.

The ODCs’ net financial asset position increased to ₱2 trillion, 45.8 percent higher than the ₱1.3 trillion recorded in the same period a year ago. This was due to the substantial increase in the sector’s deposits with the Central Bank (CB).

Conversely, the net financial liability position of the general government (GG) sector widened to ₱5.4 trillion, 29.3 percent higher than the ₱4.1 trillion in Q3 2019. This ensued as the government issued more government securities and incurred additional loans from the ROW to fund its COVID-19 response measures.

On the other hand, the non-financial corporations (NFCs) sector registered a lower net debtor position of ₱6.6 trillion from ₱7.6 trillion recorded in
Q3 2019 due to the sustained decline of the NFCs’ net liabilities against the ROW and the ODCs amid continued uncertainties and weak business environment. 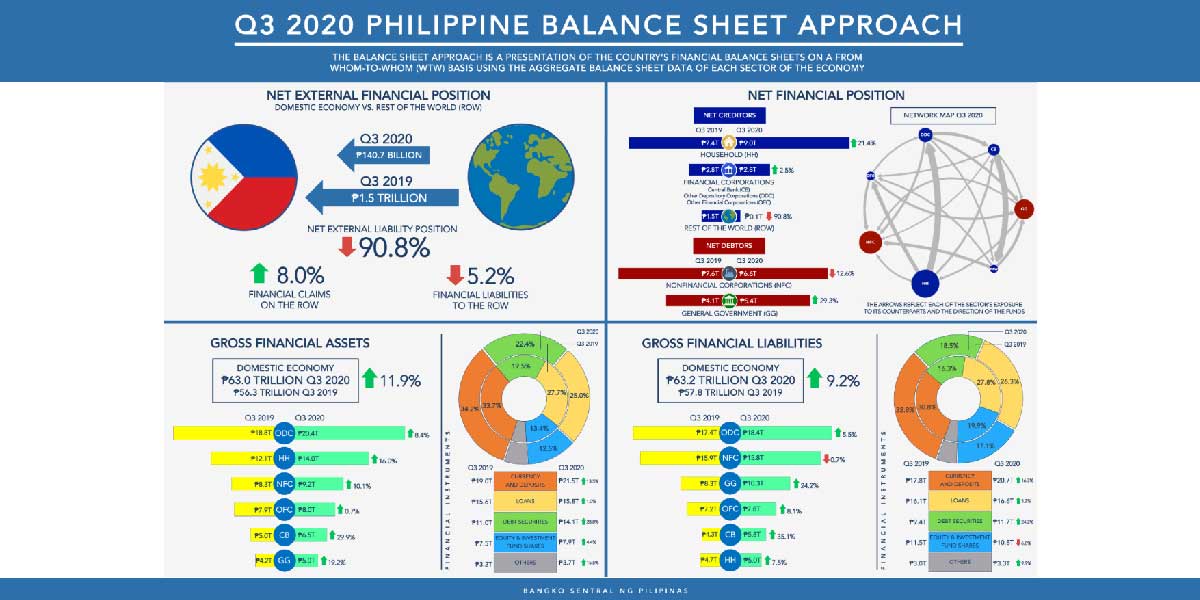 These assets were comprised mainly of currency and deposits, loans, debt securities as well as equity and investment fund shares. The ODCs accounted for about a third of the domestic economy’s financial claims at ₱20.4 trillion, 8.4 percent higher than the ₱18.8 trillion recorded in the same period a year ago.

The ODCs’ financial assets were primarily loans, which were extended mostly to NFCs and HHs, and currency and deposits as banks parked more of their loanable funds with the BSP amid the uncertainty caused by the pandemic. The HHs held the second highest stock of financial assets at ₱14 trillion, 16 percent higher than the prior year’s ₱12.1 trillion, consisting mainly of currency and deposits.

The NFCs’ financial assets grew by 10.1 percent to ₱9.2 trillion from ₱8.3 trillion in Q3 2019, following its increased deposit placements with the ODCs and bigger loan extensions to related parties abroad as well as higher equity and debt security investments with the ROW.

The GG continued to register the lowest level of financial assets at ₱5 trillion, albeit higher than the ₱4.2 trillion posted a year ago. These assets were mainly currency and deposits with ODCs and BSP as well as debt securities held by social security agencies.

The domestic economy’s financial liabilities expanded by 9.2 percent to reach ₱63.2 trillion from ₱57.8 trillion in Q3 2019. These were mostly in the form of currency and deposits, loans, debt securities, and equity and investment fund shares.

The NFCs’ liabilities declined to ₱15.8 trillion from ₱15.9 trillion a year ago. Almost 90 percent of its liabilities were loans and equity and investment fund shares owed primarily to the ODCs and the ROW, respectively.

The GG’s financial obligations surged 24.2 percent to reach ₱10.3 trillion from ₱8.3 trillion in Q3 2019. These liabilities are composed largely of debt securities held mostly by the FCs (i.e., CB, ODCs, and OFCs) and the ROW.

The OFCs’ liabilities grew 8.1 percent to ₱7.8 trillion from ₱7.2 trillion in the same period a year ago. The CB’s liabilities, the bulk of which were currency holdings of the public and deposits of the ODCs, grew by 35.1 percent y-o-y to ₱5.8 trillion in Q3 2020 from ₱4.3 trillion.

The HHs have the lowest liabilities at ₱5 trillion, mostly loans owed to ODCs.