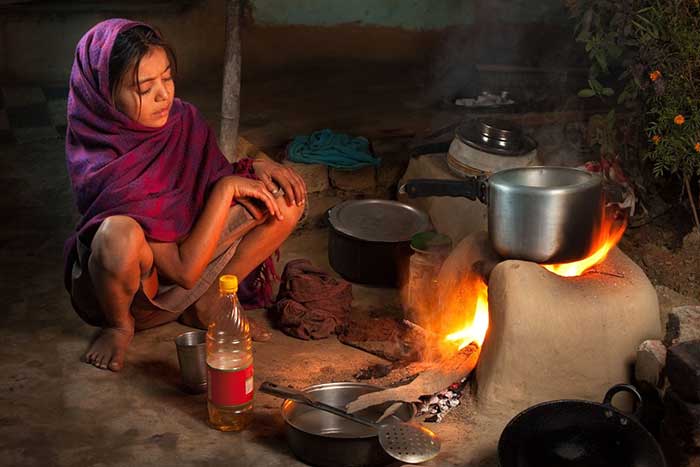 One third of the global population or 2.6 billion people worldwide still remain without access to clean cooking.

The use of inefficient, polluting fuels and technologies is a health risk and a major contributor to diseases and deaths, particularly for women and children in low- and middle-income countries.

It makes cooking with polluting fuels one of the largest environmental contributors to ill health.

Shedding further light on the extent of the problem, the World Health Organization (WHO) has recently released new data on the use of different types of fuels used for cooking at global, regional and country levels.

Breathing the smoke produced from cooking with polluting fuels can lead to heart diseases, stroke, cancers, chronic lung diseases and pneumonia. Unfortunately, millions of people continue to die prematurely every year from household air pollution, which is produced by cooking with inefficient stoves and devices paired withwood, coal, charcoal, dung, crop waste and kerosene i. Without rapid action to scale up clean cooking, the world will fall short of its goal to achieve universal access to clean cooking by 2030.

WHO’s Air Quality and Health Unit is supporting countries to address household air pollution by providing normative guidance, tools and advice to tackle the issue . The unit also monitors and reports on global trends and changes in health impacts of air pollution at national, regional and global levels.  Such estimates are used for official reporting like the World Health Statistics, and the Sustainable Development Goals.

Access to clean fuels and technologies for cooking is distributed unevenly across the globe. From 2010-2019, the rate of access to clean cooking fuels and technologies only increased by about 1.0% per year. Much of this increase was due to improvements in clean cooking access in the 5 most populous low- and middle-income countries – Brazil, China, India, Indonesia and Pakistan; the rate in other low- and middle-income countries has seen little change.

WHO just published new data in its Global Health Observatory including detailed global, regional and country estimates of the percentages and number of people using polluting or clean fuels between 1990 and 2020 with a focus on six fuel types: electricity, gaseous fuels, kerosene, biomass, charcoal, and coal. The data also include urban versus rural disaggregation.

The results show that the number of people mainly using polluting fuels for cooking declined from more than half of the global population in 1990 to 36% in 2020. While gaseous cooking fuels dominate in urban areas, biomass fuels are still common in rural populations. The reliance on electricity for cooking is growing in urban contexts. Current estimates project that one third of the global population will continue to use polluting fuels in 2030, with the majority residing in Sub-Saharan Africa.

The full data can be accessed through WHO’s Air Pollution Data Portal (https://www.who.int/data/gho/data/themes/air-pollution/household-air-pollution), which is updated regularly.