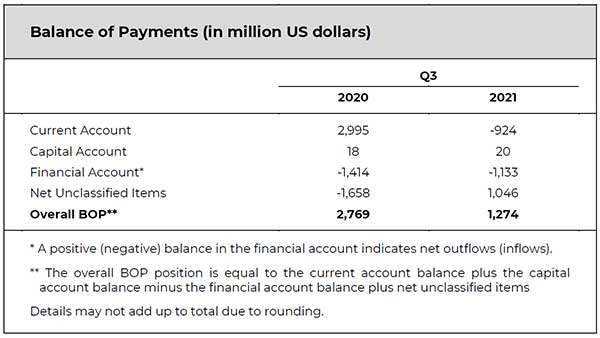 Current Account. The current account posted a deficit of US$924 million (equivalent to -1.0 percent of GDP) in Q3 2021, a turnaround from the almost US$3 billion surplus (equivalent to 3.5 percent of GDP) in the same quarter of 2020.  The reversal of the current account to a deficit stemmed from the wider trade in goods deficit coupled with the contraction in net receipts of primary income.  Meanwhile, net receipts in the secondary income and in the trade in services accounts rose during the period.

Capital Account.  Net receipts in the capital account expanded by 10.7 percent to US$20 million during the quarter from US$18 million in Q3 2020.  This developed as a result of the 8.5 percent increase in capital transfers, particularly to the Other Sectors and the National Government (NG) during the quarter.

Financial Account.  The financial account recorded net inflows (or net borrowings by residents from the rest of the world) of US$1.1 billion in Q3 2021, lower by 19.9 percent than the US$1.4 billion net inflows in the same quarter of 2020.  This resulted from the reversal of the other investment account to net outflows, which was partly offset by the growth in net inflows of direct investments and the decline in net outflows of portfolio investments.

The BOP position recorded a deficit of US$665 million in the first three quarters of 2021, a turnaround from the US$6.9 billion surplus registered in the same period in 2020. 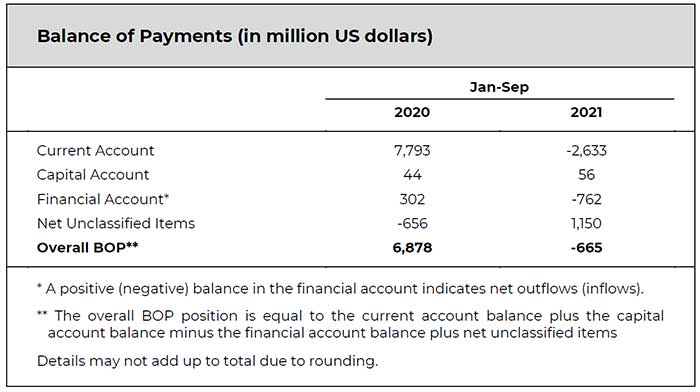 Current Account.  The current account posted a deficit of US$2.6 billion (equivalent to -0.9 percent of GDP) in January-September 2021, a turnaround from the US$7.8 billion surplus (equivalent to 3.1 percent of GDP) registered in the first three quarters of 2020.  This was due mainly to the larger trade in goods deficit combined with the decline in net receipts of primary income.  Meanwhile, the secondary income and trade in services accounts posted higher net receipts during the period.

Capital Account.  Net receipts in the capital account totaled US$56 million during the first nine months of the year, higher by 28.6 percent than the US$44 million recorded a year ago.  This developed on the back of the 62.8 percent drop in gross acquisition of nonproduced nonfinancial assets (e.g., patents, trademarks, and copyrights) to US$7 million.

Financial Account.  The financial account recorded net inflows (or net borrowing by residents from the rest of the world) of US$762 million in the first nine months of 2021, a turnaround from the US$302 million net outflows last year.  This was due mainly to the reversal of the other investment account to net inflows and the increase in net inflows of direct investments, which were partly tempered by the expansion of net outflows in the portfolio investment account.

The country’s GIR amounted to US$106.6 billion as of end-September 2021, significantly higher than the US$100.4 billion level registered as of end-September 2020. At this level, the reserves adequately covered 10.1 months’ worth of imports of goods and payments of services and primary income. It was also equivalent to 8.6 times the country’s short-term external debt based on original maturity and 5.7 times based on residual maturity.  The year-on-year increase in reserves reflected inflows largely from the BSP’s foreign exchange operations, income from its investments abroad, and the NG’s net foreign currency deposits with the BSP.  By asset component, the bulk of international reserves were held in the form of foreign investments (84.2 percent), gold (8.3 percent), and the rest in aggregated holdings of Special Drawing Rights (3.7 percent), foreign exchange (3.1 percent), and reserve position in the Fund (0.7 percent).

For Q3 2021, the peso depreciated by 3.8 percent against the US dollar to average P50.11/US$1 from the Q2 2021 average of P48.18/US$1. Likewise, on a year-on-year basis, the peso depreciated by 2.3 percent from P48.94/US$1 due partly to concerns over the spread of COVID-19 Delta variant in the country.  Compared to the same quarter last year, the exchange rate was less volatile with a standard deviation of P0.4 in Q3 2021 from P0.44 in Q3 2020.  For the third quarter of 2021, the peso generally depreciated against the baskets of currencies of major trading partners (MTPs), trading partners in developing (TPI-D) and advance (TPI-A) countries in both nominal and real terms. This indicates an increase in external competitiveness against these trade baskets of currencies for the review period.