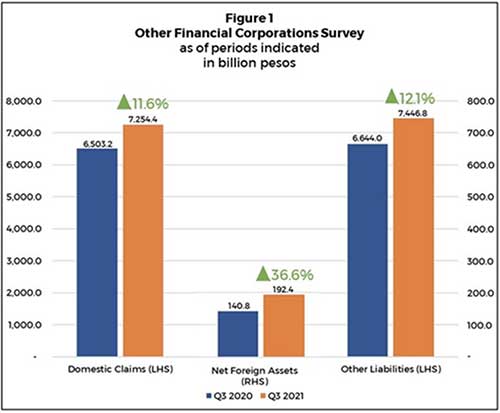 This increase was primarily attributed to the higher claims on the private sector, which expanded by 22.7 percent in Q3 2021 to ₱3,935.6 billion from ₱3,207.9 billion in Q3 2020, owing to OFCs’ higher investments in equity securities issued by private nonfinancial corporations and loans extended to households.[2]

In addition, claims on depository corporations inched up by 0.8 percent from ₱1,638.6 billion in Q3 2020 to ₱1,652.5 billion in Q3 2021 on account of higher investments in bank-issued equity securities and increased deposits in banks. Net claims on the central government also increased, albeit marginally, by 0.5 percent to ₱1,648.7 billion in Q3 2021 from ₱1,640.8 billion in the same period last year. This was largely due to the rise in the sector’s holdings of debt securities issued by the National Government.

Meanwhile, the net foreign assets (NFA) of the OFCs grew by 36.6 percent from ₱140.8 billion in Q3 2020 to ₱192.4 billion in Q3 2021. The growth was driven by higher claims of OFCs on nonresidents, which were mostly in the form of investments in debt and equity securities.

The increase in the OFCs’ assets was funded mainly by the sector’s issuances of shares and other equity. The upturn in equity and insurance technical reserves (ITR), resulted in a 12.1 percent rise in the other liabilities of OFCs, amounting to ₱7,446.8 billion in Q3 2021 from the ₱6,644 billion in Q3 2020.[3] (BSP)

[3] The ITR are amounts set aside by insurance companies to meet future insurance liabilities, such as but not limited to unearned premiums, outstanding claims, expected losses, bonuses and rebates (for life insurance).