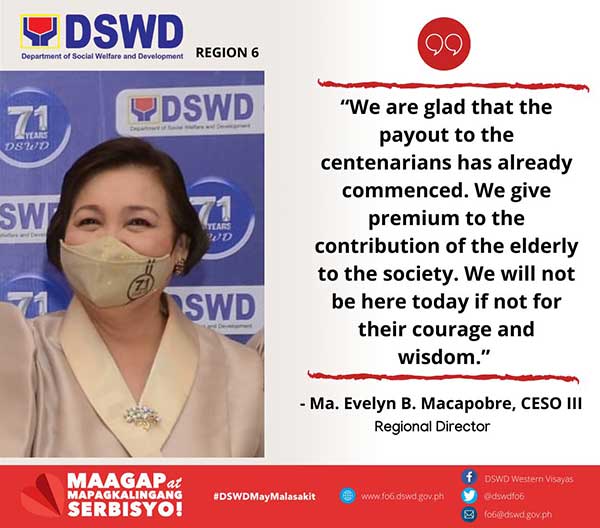 The Department of Social Welfare and Development (DSWD) Field Office VI has started the distribution of cash gift to centenarians in the region.

So far, a total of 84 centenarians have received the cash gift amounting to P100,000 each or a total of P8.4 million disbursed.

These include six from Iloilo City; eight from Iloilo Province; 23 from Capiz; five from Guimaras; 14 from Antique; five from Bacolod City; and 23 from Negros Occidental.

This comprises 52.5 percent of the total 160 centenarians listed in Western Visayas.

“We are glad that the payout to the centenarians has already commenced. We give premium to the contribution of the elderly to the society. We will not be here today if not for their courage and wisdom,” said DSWD-6 Regional Director Ma. Evelyn B. Macapobre.

The payment of the cash award is mandated by Republic Act 10868 or the Centenarian Act.

A P16 million fund was downloaded for Region 6 earlier.

According to Doyien Castillo, focal person for implementation of the service for Centenarians, they are fast tracking the payout to ensure completion of releasing.

As specified in Republic Act 10868 or the “Centenarians Act of 2016,” Honoring Filipinos who have reached the age of one hundred years old whether residing in the Philippines or abroad, the centenarians will receive awards and incentives that include a cash gift of P100,000 and a Letter of Felicitation signed by the President from the national government thru DSWD.

Also, the Local Government Units (LGUs) are directed to give awards and incentives wherein amount for the cash incentive will be determined by LGUs thru a resolution or ordinance. (DSWD-6)