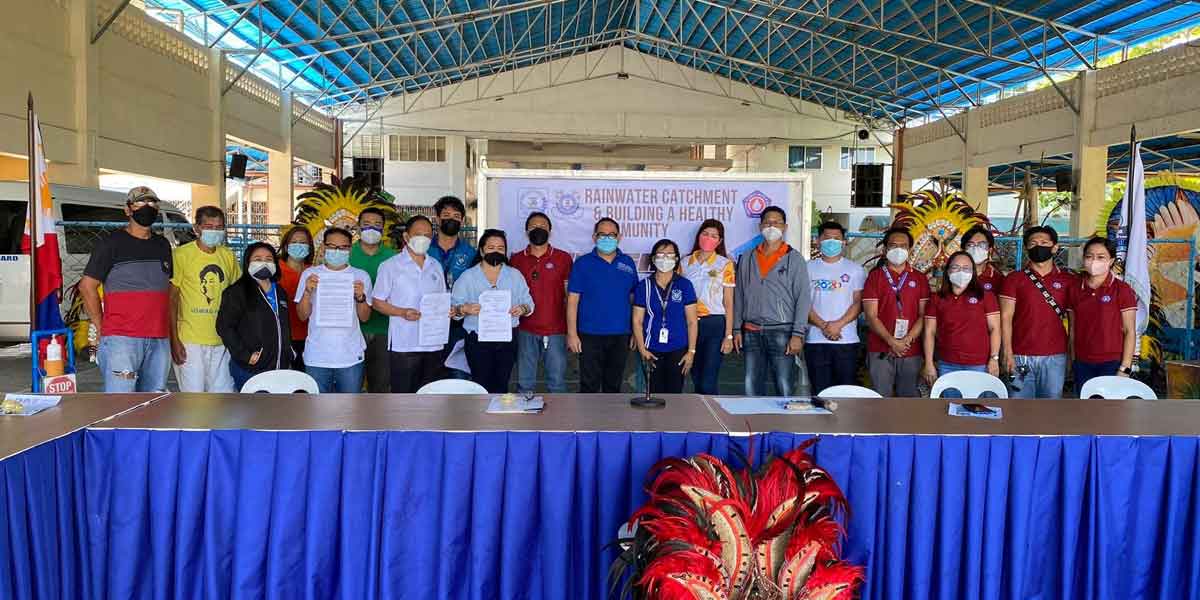 The Management and staff of Metro Iloilo Water District (MIWD), John B. Lacson Foundation Maritime University (JBLFMU), in partnership with local communities in Trapiche in Oton, Iloilo; and Sto. Niño Sur and Norte as well as Sooc in Arevalo, Iloilo City took part in distributing rainwater catchment units to recipient families of Trapiche and Sooc on Jan 13 and 17, 2022.

The distribution activities began with the signing of the Memorandum of Agreement by key representatives of the involved organizations – MIWD OIC-General Manager Amarylis Josephine Castro, Dr. Ronald Raymond Sebastian of JBLFMU, and Mr. Roberto Parcia and Mr. Melchor Magramo for the Sooc and Trapiche MOA signing and Sto Nino Sur and Norte MOA signing, respectively.

The rainwater catchment units were designed by MIWD as part of its Climate-Change Mitigation initiatives. Each catchment unit can hold up to 200 liters of water and can be used for day-to-day activities and will prove invaluable for emergency use during dry spells.

A total of 200 rainwater catchment units were distributed evenly among Barangays Sooc, Sto. Nino Sur and Sto. Nino Norte in Arevalo and Barangay Sooc in Oton.

The MIB also extended its support to the project by providing the large blue drums to serve as the water storage for the catchment units.

The Barangays Halls of Trapiche in Oton and Sooc, Sto Nino Sur, and Sto Nino Norte in Arevalo were also given rainwater catchment units but were fitted with ten large water drums each, for larger community use.

Aside from the rainwater catchment units, a total of 125 food packs were given to recipient families from all the recipient barangays as part of MIWD’s Risk Reduction and GAD under the program of “Building a Healthy Community”.

This is one way of extending assistance to children and families in these pandemic-riddled times.