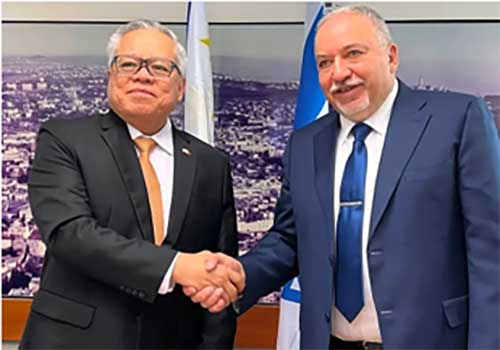 Secretary of Trade and Industry Ramon M. Lopez and Israel Finance Minister Avigdor Lieberman signed the Investment Promotion and Protection Agreement at the Israel’s Ministry of Finance in Jerusalem on June 7, 2022.

Secretary Lopez sees the IPPA as an important arrangement in encouraging more investments.

The trade chief said, “The Philippines eyes Israel’s expertise on innovation, especially in new and smart technologies that will bring about more competitive and efficient products. On the other hand, Israeli investors expressed interest in investing in the infrastructure, agriculture and water, and business process outsourcing (BPO) sectors in the Philippines.”

Philippine Ambassador to Israel Macairog Alberto highlighted that the investment agreement lays down the framework for a closer investment relation between the countries deepening our shared historical ties.

Sec. Lopez reiterated a more conducive investment environment between the Philippines and Israel this coming administration, “Israeli investors can certainly look forward to maximizing the gains from the game-changing legislative amendments such as the liberalization of the public services act, retail trade liberalization law, and the foreign investments act and now is the most opportune time to do so.”

In 2020, Israel ranked 34th as the Philippines’ trading partner, 39th export market, and 31st import supplier. The approved investments from Israel primarily come from the manufacturing, wholesale and retail trade, and repair of motor vehicles and motorcycles industries.

Two other agreements are signed with Israel, i.e., the launch of the Joint Economic Commission and the Cooperation Agreement with the Israel Innovation Authority. Secretary Lopez will also be signing within the week an IPPA with the United Arab Emirates, which is also a party to the Abraham accords.