Presidential candidate Sen. Panfilo Lacson has run traditional media ads worth almost one billion pesos as of December 2021 — when it was still more than a month before the start of the campaign period on February 8 and no law banned or limited pre-election advertising.

Data from Nielsen showed that TV, radio, print, and outdoor billboard ads he ran from January to December 2021 were worth P915.30 million. Separately, he shared ads with his running mate Senate President Vicente Sotto III worth P215 million.

The amounts were based on published rate cards or before discounts were given to his campaign team. Nielsen does not capture the negotiated or agency rates that are being paid for by the candidates.

Under Republic Act (RA) 9006 or the Fair Elections Act, up to 50% discount is given to candidates’ TV ads, for example. The law is effective during the campaign period but campaign teams that spoke to PCIJ said they had received discounts this early.

Lacson, a former national police chief turned multi-term senator, has topped ad spending among all candidates in all positions on traditional media so far.

He doubled down on ad spending in November — a month before the December pre-election surveys — when he aired ads worth P496.68 million. It was a little more than half of his total ad spending on traditional media in 2021.

PCIJ reached out to Lacson and his spokesperson, Francisco Acedillo, to ask how the ads were paid. Their statements will be added as soon as we receive a response.

Among presidential candidates, Lacson was followed by Manila mayor Francisco Domagoso, who aired ads worth P735.44 million during the 12-month period. He also ran a few ads with his running mate Willie Ong worth P390,000.

Domagoso started a massive TV campaign in September 2021 — coinciding with the runup to the filing of candidacies when he was being considered as the candidate of opposition coalition 1Sambayan.

Moreno aired ads worth P305.97 million in September and P331.51 million in October before he slowed down on spending in November (P92.76 million).

In December, he tightened his belt even further. He ran ads worth only P3.19 million.

Moreno’s ad spending is expected to increase again in January 2022. His ads have appeared during presidential interviews on TV and radio.

Heavy spending among candidates shows the “unfairness” of the country’s election system, said presidential candidate and labor leader Leody De Guzman, who could not afford ads on traditional media. He recorded zero spending in Nielsen’s data.

This setup embroils future leaders in potential conflicts of interests because they are forced to rely on big businesses to fund their campaigns, he pointed out.

(They sometimes pawn their principles to big business, which have the billions. That’s what happens to our country every time we change the government. Favors are given to those who financed their campaigns. Of course, the interests of big businessmen run afoul of the public interest.)

De Guzman said that in future elections, the government should shoulder the cost of introducing candidates to voters using state resources such as government TV stations.

He said he would rely on media interviews to discuss his platform.

TV remains the top source of voters’ information about candidates, followed by radio and the Internet, according to a Pulse Asia survey conducted in October 2021.

Robredo and former senator Ferdinand Marcos Jr caught up on their ad spending in the aftermath of the filing of candidacies.

After spending about P26,000 in March and less than P400,000 in July, Robredo began to pour more money into ads in August, when she aired ads worth P52 million. In November, Robredo spent P147.76 million and overtook Moreno’s spending that month.

In total, Robredo aired ads worth P500.47 million in 2021. She also had a few ads with her running mate Sen. Francis Pangilinan, worth P1.33 million.

After a slow start, Marcos topped ad spending among all candidates in December, signalling what could be the beginning of heavy spending to keep his double-digit lead in the polls.

Apart from the five, no other presidential candidates have figured in traditional media advertisements.

Sen. Christopher Lawrence “Bong” Go, who filed but later withdrew his presidential bid, aired ads worth P158.95 million. The amount was on top of his tandem ads with President Rodrigo Duterte, which were worth P5.35 million.

The Nielsen data does not include candidates’ spending on social media. Based on Facebook’s Ad Library, the Robredo camp topped spending on the social media platform in 2021 after shelling out P14.1 million. Among presidential candidates, she was followed by Lacson who recorded spending P5.36 million.

Heavy ad spending by Lacson and Moreno did not immediately translate to better showing in the polls, however.

Lacson spent P496.68 million in November. It was a little more than half of his total spending in 2021.

His numbers did not improve in the succeeding survey conducted by Pulse Asia from Dec. 1-6, 2021. He ranked fifth among presidential candidates, with just 6% of respondents saying they would vote for him.

His numbers also did not move compared with the September polling. There was a slight increase in the National Capital Region but it was within the margin of error.

Moreno also spent heavily on ads, particularly in September and October 2021, when he ran ads worth over P300 million each month.

Robredo ranked second in the poll after her numbers improved 12 points to 20% in December from 8% in September.

It was in the Senate race — known to be a game of name recall — where heavy spending appeared to have translated into poll numbers.

Alan Cayetano, who topped ad spending before filing of candidacies in October 2021, slowed down toward the end of the year.

The amounts were on top of separate ads they shared with other candidates or family members. 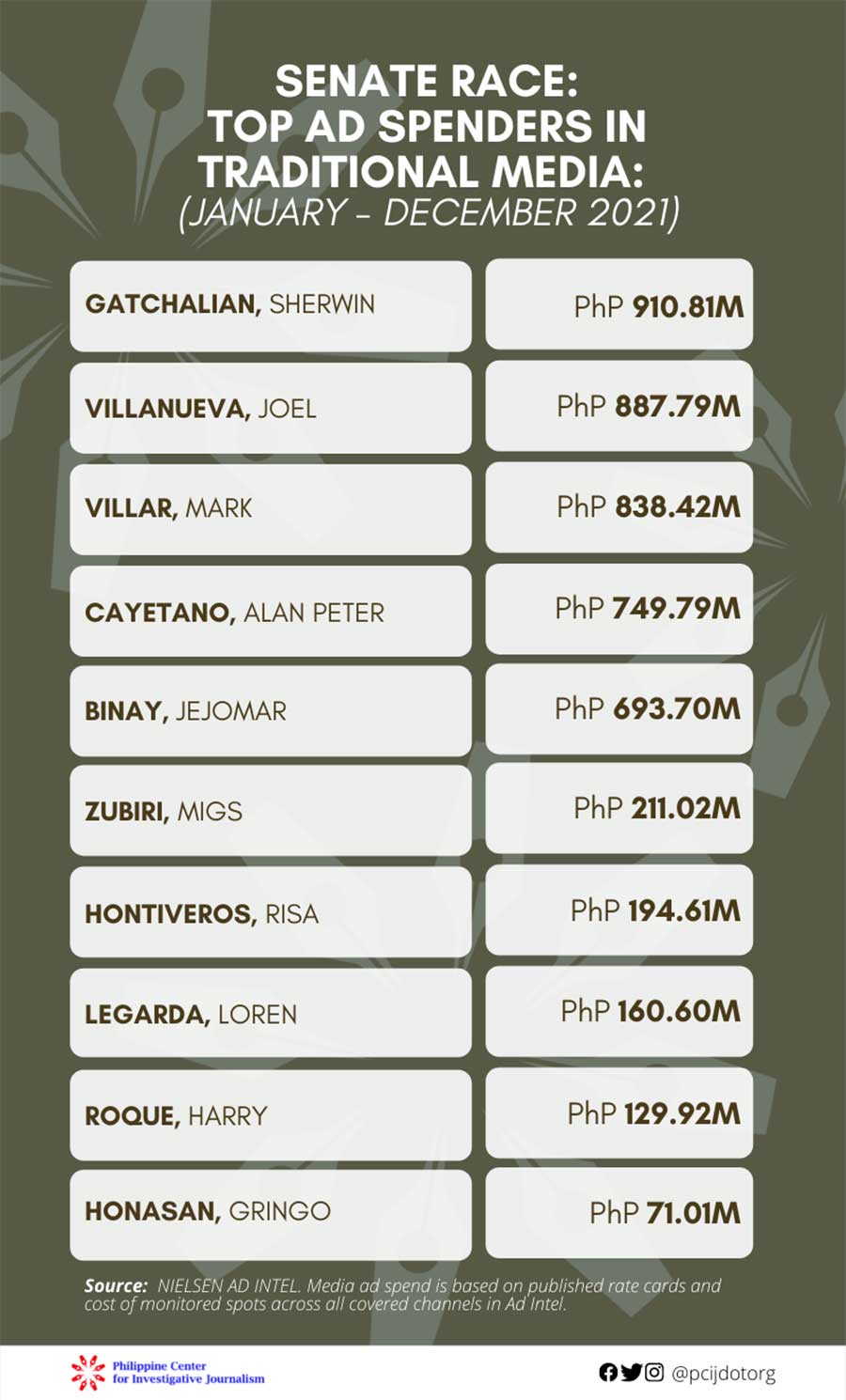 Gatchalian, Villanueva, Villar, and Cayetano were in the “Magic 12” circle of winning candidates, based on the December survey of Pulse Asia.

Advertising limits will be imposed beginning Feb. 8, the start of the campaign period for national candidates.

An election reform law passed in 1991, Republic Act 7166, also limits ad spending of presidential candidates to P10 per voter or a maximum P640 million over the three-month period based on the Commission on Election’s projected number of registered voters for the May 2022 elections.