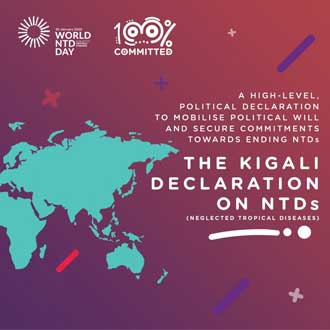 To commemorate World NTD Day last January 30, global leaders convened to celebrate the 10-year anniversary of the London Declaration and kick off endorsements to the Kigali Declaration on Neglected Tropical Diseases (NTDs) – a high-level political declaration which aims to mobilise political will and secure commitments to achieve the targets set out in the World Health Organization (WHO) NTD road map 2021-2030 and the Sustainable Development Goal (SDG) target on NTDs.

NTDs are a group of 20 diseases like blinding trachoma, intestinal worms and elephantiasis which are preventable and treatable, but still affect 1.7 billion people around the world. By preventing children from going to school and adults from being able to work, NTDs trap individuals and whole communities in cycles of extreme poverty.

“NTDs tend to thrive in developing regions of the world, where water quality, sanitation, and access to health care are limited. We consider the Philippines as one of these target areas. These [diseases] include leprosy, rabies, and foodborne trematodiasis” said Jona Turalde, the Philippines’ representative to the Youth Advisory Board of Uniting to Combat NTDs. “With Covid-19, a lot of public health issues are being neglected and part of this are neglected tropical diseases. We must strategize and include NTDs in our health plans, especially as part of universal health coverage,” she added.

Key successes since the London Declaration include over one billion people reached with treatment for NTDs each year, five years in a row; 35 countries have eliminated at least one NTD bringing the overall total to 43 countries; and 600 million fewer people now require NTD treatments. Preliminary data shows that only 14 cases of Guinea worm disease were reported globally in 2021, representing the lowest case total, since the beginning of the eradication programme in the mid-1980s. This progress proves that ending NTDs is possible, however, there is still more to be done.

The Kigali Declaration aims to protect the gains that have been made, whilst accelerating action by putting country ownership, integration, and cross-sectoral collaboration front and centre. This will ensure the long-term sustainability of these programmes and the achievement of the WHO NTD road map and SDG 3 targets.

Driving endorsements and commitments towards the Kigali Declaration is the 100% Committed to ending NTDs campaign, also launched on January 27th. The 100% Committed campaign will be led by countries affected, backed by bold financial and political commitments, and championed by civil society, influencers, and people affected by NTDs calling for action.

Significant challenges remain in the journey to elimination of NTDs, including climate change, conflict, emerging zoonotic and environmental health threats, as well as continued inequalities in access to healthcare services, adequate housing, safe water and sanitation. There are also major gaps in current intervention packages of diagnostics, treatment and service delivery models.

“Ending NTDs makes our health systems more resilient and equitable. Also, [this is] possible within our lifetime, and now is the moment for key leaders, especially [the] Philippine government, to make commitments”, Turalde added.

Now in its third year, World NTD Day aims to generate awareness and action around the need to end neglected tropical diseases. The day was officially recognized by the WHO in 2021 following the unanimous adoption of a resolution proposed by the United Arab Emirates (UAE) alongside Oman and Brazil. This year, World NTD Day will see over 100 key landmarks across the globe light up in unity to bring attention to NTDs with support from more than 350 global partners.

Neglected tropical diseases (NTDs) are a group of infectious diseases that affect over 1.7 billion people around the world. They debilitate, disfigure and can kill. Uniting to Combat NTDs is a collective of invested, interested and dedicated partners, including governments, donors, pharmaceutical companies, non-governmental organisations, academia and more. The partnership is committed to the fight to end the epidemic of NTDs.