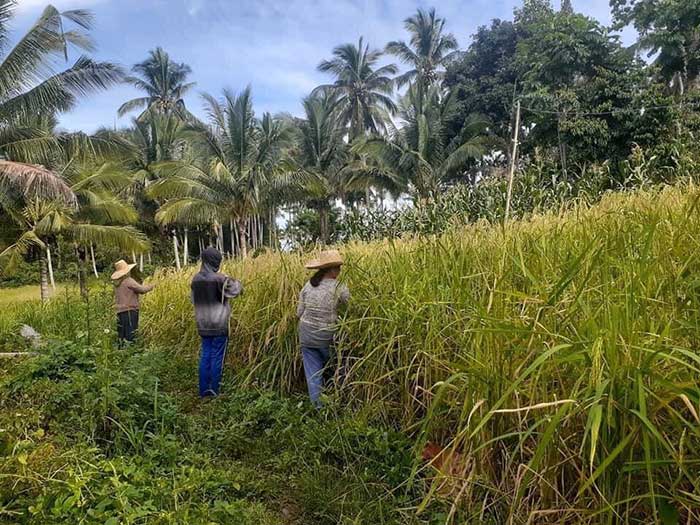 Resilience to conflicts and violence is part of the history of the Teduray-Lambangian, one of the major indigenous peoples in Maguindanao, southern Philippines. However, another type of resilience for these communities has been put to the test with the worsening impacts of the climate crisis.

For centuries, these peoples have practiced the “sulagad”, a sustainable farming system that avoids the use of artificial fertilizers and pesticides. Farmers maintain fertility through cycles of land preparation, ensuring the harvesting of nutritious crops and healthy livestock. This system is not only their primary livelihood, but also as a means to self-sufficiency.

However, the Teduray-Lambangian communities have started experiencing more droughts that have drastically affected its food security. Eduard Abelardo, a resident of Bungcog Upi in Maguindanao, recalls how water shortage has impacted the well-being of his people during a drought two years ago.

“We needed to walk two to three kilometers to get water, yet almost all of our plants died except the hard crops that are intendedly planted in preparation for the drought season in order for us to survive,” he said.

In the midst of this crisis, small businesses by non-indigenous settlers capitalized by selling drinking water at 20 to 25 pesos per large gallon. Many of the poorer residents, whose livelihoods were already affected by the droughts, cannot afford to buy them.

“Since most of us have limited resources, they prefer to walk with their carabao or cows to go to the rivers,” Abelardo said.

The plight of the local farmers was made worse by the lack of assistance from their local government. According to Abelardo, an accessible water system has been promised to them since 2002, yet no working infrastructure has been implemented as of today.

“The government is blind in collecting of data. In fact, there were droughts that have come, but there was no declaration of a state of calamity”, he remarked.

While many areas in the Philippines or elsewhere are choosing to use modern technological solutions to adapt to climate change impacts, the Teduray-Lambangian are opting to rely on their indigenous practices to deal with potential calamities. For them, it comes down to being more observant of their environment.

“Our elders can determine when a drought, famine, or rainy season would occur within a year through the arrangement of the stars, the clouds, the moon, the boom of the flowers, humming of the birds, and seeds of trees,” he said.

The practice of observing indicators within nature has allowed them to react to changes in the local climate, including adjusting the start of their planting season. Correctly assessing the pending start of droughts, for instance, allows them to plant crops that can survive dry conditions such as wild cassava and ube. Before farming, the elders seek permission to their deity to bless them and their potential harvests and maintain their connection to their environment.

This, along with other indigenous practices, have been passed down through generations. Some households use their harvest to trade within and among neighborhoods instead of paying money. The entire community, from elders to the youth, is involved throughout the planting cycle as a means of both adapting to environmental changes and strengthening communal harmony.

Relying on their indigenous practices has allowed the residents of Bungcog Upi to maintain food self-sufficiency even during the COVID-19 pandemic. Abelardo cited the lack of support from the local government in relieving adverse socioeconomic impacts, noting that “they only deliver rice and can goods once or twice during lockdowns”.

Meanwhile, the Teduray-Lambangian remain cautious of aggressive development projects and the introduction of new technologies in nearby areas. They regard these endeavors that directly target their sources of food, water, raw materials, and livelihoods and do not account for their cultural norms and traditions as false solutions.

“We are so violated by strongly implementing these science-based approaches, without considering our cultural norms and good practices developed through many centuries,” Abelardo added.

More importantly, Abelardo regards the agricultural practices of the Teduray-Lambangian as living proof of the resilience of his people in an ever-changing world for years to come.

“Our ancestors and elders experienced this type of era. It is a reason we have many indigenous practices to counter it,” he said.

John Leo is a climate and environment journalist since 2016. He is also the Deputy Executive Director for Programs and Campaigns of Living Laudato Si’ Philippines and a member of the interim Secretariat of Aksyon Klima Pilipinas.