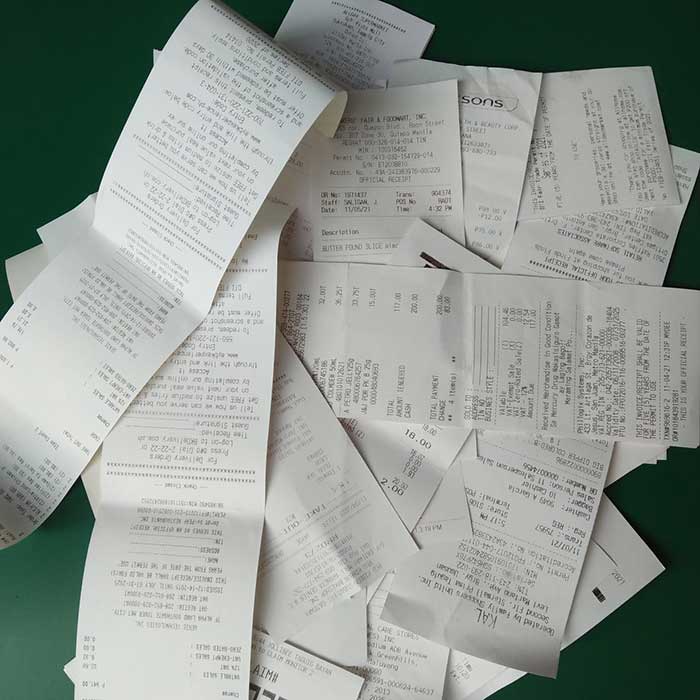 Three civil society groups today urged the government and business sectors to protect workers and the general public from the adverse effects of exposure to endocrine disrupting and cancer-linked chemicals present in thermal transaction receipts.

At the “Kapehan sa Dabaw” in the morning and the “Forum on Hazardous Chemicals in Thermal Paper Receipts” in the afternoon, representatives of the Interfacing Development Interventions for Sustainability (IDIS), EcoWaste Coalition and the Wonjin Institute for Occupational and Environmental Health (WIOEH) shed light on the hidden hazards of such type of receipts.

During the said events, the groups revealed the results of a pioneering study that detected Bisphenol A (BPA) and its cousin Bisphenol S (BPS) in samples of thermal receipts collected by IDIS and the EcoWaste Coalition from various establishments in Davao, Makati, Manila, Quezon and Taguig Cities.

The samples, obtained from government offices, local and global franchise stores, large supermarkets, groceries or convenience stores, banks, pharmacies and other sources, were then shipped to South Korea for analysis.

Based on the analysis conducted by the WIOEH, 32 out of the 53 analyzed samples from the Philippines had BPA in concentrations ranging from 0.92 to 1.86 percent, way above the European Union’s limit of 0.02 percent.  Thirteen of the 53 samples had 0.61 to 1.12 percent BPS.

“The test results are deeply concerning as the data show that thermal paper receipts coated with BPA or BPS are widely used in commerce. These receipts may be a significant pathway for BPA/BPS exposure for some sectors,” said EnP Lemuel Lloyd Manalo, Program Coordinator, IDIS, stressing that “the authorities need to act fast to protect the most vulnerable, particularly women and children.”

“Thermal paper receipts containing BPA or BPS present health hazards for both cashiers and customers who are unsuspectingly exposed to these hazardous chemicals every time they handle or touch such receipts,” said Manny Calonzo, Adviser, EcoWaste Coalition, adding “these chemicals can be easily absorbed by the skin.”

“Our analytical findings, we hope, will move policy makers into regulating BPA and BPS, especially the use of these substances in thermal transaction receipts.  There is an urgent need for stronger policies that will protect workers and the society as a whole from EDCs and other hazardous chemicals,” said Dr. Won Kim, EDC-Free Asia Project Leader.

BPA is classified as an endocrine disrupting chemical (EDC) and is linked to an array of side effects such as diabetes, obesity, increased blood pressure, cardiovascular disease, neurological problems, infertility and other reproductive disorders, and breast and prostate cancers.  BPS, a regrettable replacement for BPA, has been shown to exhibit similar hormone disrupting properties and toxicological effects.

To prevent human exposure to BPA or BPS, the groups are recommending the following action points:

For the Government:  Promulgate a national policy banning  BPA and BPS in thermal paper receipts, and for local government authorities to enact complementary ordinances.

For the Business Sector:  Switch to transaction receipts without BPA, BPS and other harmful compounds.

For the Civil Society:  Raise awareness on EDCs and push for measures to reduce human exposure to such chemicals.

The said study on BPA/BPS in thermal paper receipts is part of the eight-country EDC-Free Asia Project led by the WIOEH with support from the Korea Financial Industry Public Interest Foundation (FIPIF) and the members of the International Pollutants Elimination Network (IPEN) in the region.