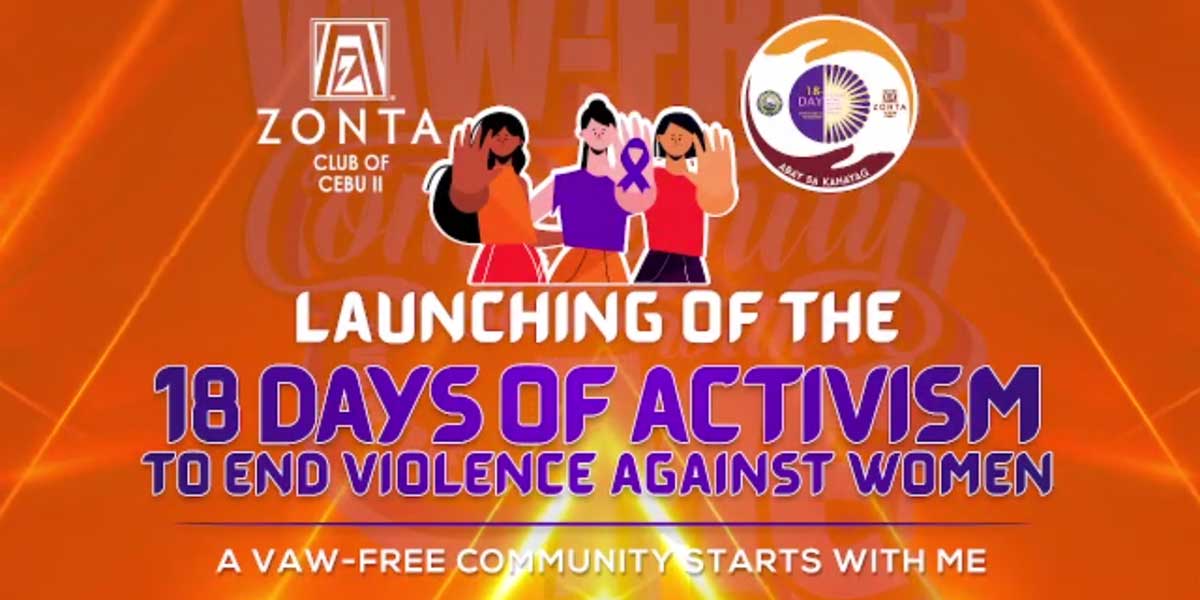 The world needs to find its passion when 1 in 5 women say they have experienced violence in their life. (Source: United Nations and UNICEF)

It is with this passion that the Zonta Club of Cebu II launched 18 Days of Activism to End Violence Against Women.

Last November 25, 2021, hundreds of women raised their hands to call attention to the plight of women and girls around the world. Supported by the Integrated Bar of the Philippines Cebu City Chapter and the City of Mandaue through the advocacy, “Abay sa Kahayag (Guiding Light)”, the event aims to extend a helping hand to victims of abuse and raise awarenes about discrimination, gender inequality and women empowerment.

“We are all here to celebrate every woman on this planet especially now, during the pandemic when millions of women and girls are facing heightened insecurity and violence”, Zontian Atty. Regal Oliva enthusiastically said in her opening statement.

A staunch supporter of women and President of Zonta Club of Cebu II, Petite Garcia adds, “The 18 days campaign to end violence against women and children marks its 30th year and is a call to eliminate all forms of gender-based violence and to galvanize women from all backgrounds, women, and girls who are tired of being demeaned, diminished, and dominated. Let us not ask any woman or child to settle for less or to wait any longer. For THIS is our time and the time is NOW.”

Resource speaker Attorney Mylen Gonzales-Esquivel from the Children’s Legal Bureau led a very engaging discussion on “Dissecting the Girls Not Brides Bill” and expounded on the need to PUSH for its enactment.

The Philippines has a number of child protection laws, and yet, according to UNICEF, the country has the 12th highest absolute number of child brides in the world. The 1987 constitution highlights the vital role of the youth in nation-building and despite this provision, and other statutory laws enacted, none specifically address the issue of early marriage.

The Philippines is a signatory to a number of international instruments that promote and protect the rights of children. “For us to push for gender equality and empower all women and girls, there is a need to push for the enactment of the Girls not Brides Act”, Atty. Esquivel said. The Girls not Brides Bill defines child marriage as an informal union or cohabitation outside of wedlock between an adult and a child, or between children. It stipulates to abolish all traditional and harmful practices, affirms the human rights of children, and views child marriage as a practice constituting child abuse. Any human being under 18 years of age, or any person who is 18 and over, who is unable to care and protect oneself from abuse is protected by this bill.

Attorney Bernz Amago shared with a resolute voice, “Providing the legislative framework of prohibiting Child Marriage and declaring the same as illegal sends a clear message that the country does not condone these abhorrent practices that patently violate human rights.” If passed into law, the act will be titled, “An Act Prohibiting the Practice of Child Marriage and Imposing Penalties for Violations Thereof”.

How can each one of us support the bill? Under the bill’s section 5, the unlawful and prohibited acts against girls are deemed public crimes. Therefore, anyone can initiate a complaint against the person who committed the unlawful or prohibited act. Report the crime. Support the victims.